Established by Dave Wilson in 1938 on a small piece of rented ground near Modesto, California, our company has grown to become one of the largest growers of deciduous fruit, nut, and shade trees in the United States.

Our growing grounds are located east of Modesto in the Sierra Nevada foothills, near the town of Hickman.

Dave Wilson Nursery grows trees for both commercial orchards and the home garden trade. We maintain three sales departments that provide the highest level of professionalism and integrity in the industry.

Dave Wilson Nursery is a family owned and operated company. John Wynne, Dave Wilson’s son-in-law, joined the company in 1950 and became a partner with Dave in 1951. John purchased the nursery’s main office site along the Tuolumne River in 1967.

Robert Woolley, John’s son-in-law, joined the nursery in 1980 and in 1989, Robert and his wife, Jane, (Dave Wilson’s granddaughter) acquired the company. Dave Wilson Nursery became a California corporation in 1999.

In 1995, we relocated our regional office and variety test block from Selma to its present location east of Reedley, California. We are currently farming more than one thousand acres, on a four-year rotation, growing over four million trees a year.

To accommodate increased production and allow for longer periods of cover cropping in between nursery stock, Robert and Jane purchased the 640-acre Red Rock Ranch in 1996.

In 2020, Dave Wilson Nursery acquired Fredriks Nursery in Ripon to expand the potted division through 24 acres of existing greenhouses. 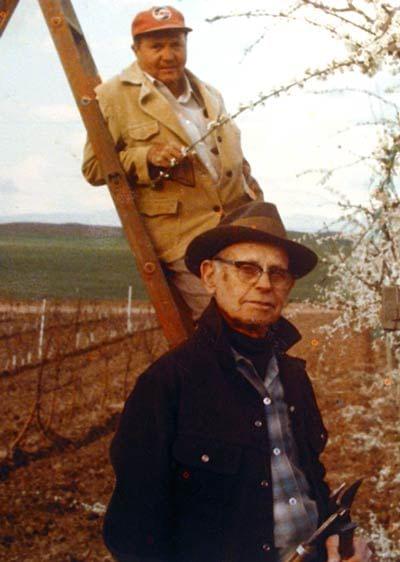 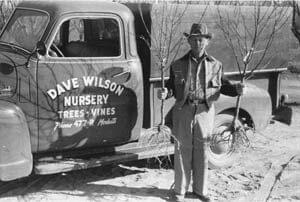 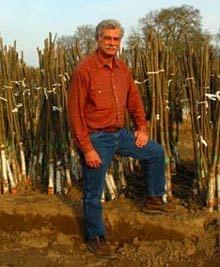 Robert with the 2002 Walnut crop

We inspire and help people successfully grow fruit. When our customers win, we win. All customers, new, old, big, small, are given the same high-quality customer service. We’re ready to help with everything from product questions to confirming and fulfilling orders.

Get in touch with us